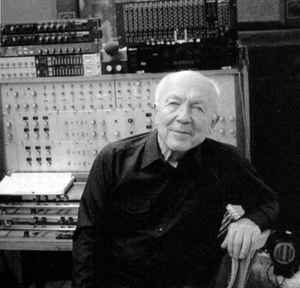 Profile:
Oskar Sala (July 18, 1910, Greiz, Germany - February 26, 2002, Berlin, Germany) was one of the most innovative composer in the history of electronic music. His instrument, the Mixtur-Trautonium was first introduced to the public in 1952 and soon received international licenses. Its massive architecture remains so unique that nobody is able to reproduce the instrument nor interpret any of his compositions

Oskar Sala had been a pupil of Friedrich Trautwein, the inventor of the Trautonium. But physicist Sala studied music with Paul Hindemith in 1930 at the Berlin conservatory and also played his compositions for Trautonium. Early on with Trautwein, he composed pieces for Trautonium and performed them with the Berlin Philharmony conducted by Carl Schuricht in 1940.

From the 40's, he dedicated himself to film scoring and helped numerous classics to gain their musical refinements. In 1960, Alfred Hitchcock was unsuccessfully searching for an acoustic environment to his eerie bird scenes until Sala convinced him to use his Trautonium-generated sound-effects.

In the year 2000 Peter Badge made a 120 pages book about Oskar Sala, wich is listed on discogs here:
Oskar Sala - Pionier Der Elektronischen Musik
It containes many photos of Sala, the Trautonium, newspaper-articles etc., a text in German & English language, a long filmofraphie od Sala's film music and more. It also includes CD-ROM / AUDIO CD with a running-time of 73:39 minutes. You may check a video with 4.30 minutes of insights into the book here: www.youtube.com/watch?v=xWta-WQRIjY .
Sites:
trautonium.de, hg11.com, olats.org
Variations:
Viewing All | Oskar Sala
O. Sala, Oscar Sala, Sala

The Existential Universe: Music of Personal and Profound Discovery (A Record Diary) [Volume 1] by bhcampbell
Rest... In... Peace... by crimsonmetal74
Artists to watch by wacky_gee
Favorite Artists by mike82
Aural Live Experience: A Musical Biography In Live Concerts by quatschonaut
The Beauty of Synth by Jared_DiCarlo
Production music by Jared_DiCarlo
Synthesists by bicho
View More Lists →