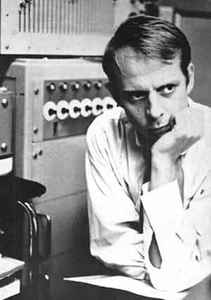 Karlheinz Stockhausen was a German composer, acknowledged by critics as one of the most important but also controversial composers of the 20th and early 21st centuries. He is most known for his groundbreaking work in electronic music, aleatory (controlled chance) in serial composition, and musical spatialization.
He studied with Martin at the Cologne Musikhochschule (1947-51), but the decisive stimulus came from his encounter with Messiaen's Mode de valeurs at Darmstadt in 1951. There he saw the possibilities of long-range serial process which he pursued in Kreuzspiel (1951) and KontraPunkte (1952), both for piano-based ensemble. The latter piece was written during a period of study with Messiaen in Paris, and while there Stockhausen made his first foray into electronic music. On returning to Cologne he continued this activity, notably in Gesang der Jünglinge (1956) for vocal and synthesized sounds on tape. At the same time, he pursued the ramifications of serial instrumental music. In 1958 he made his first visit to the USA, and around this time his music became more relaxed, both in its density of events and in its notational exactitude. This was partly a result of John Cage's influence, and partly it came from the experience of electronic music, which suggested a different way of hearing.

The man who made me understand that as long as it's sound, an artist can do what they want with it. Piecing together sounds and such into an array of diverse musical oddities, he remains one of the more unique in the electronic world. Honestly, if you have any interest what so ever in the history of experimental, avant-garde, or electronic music, Stockhausen is still one of the best choices.