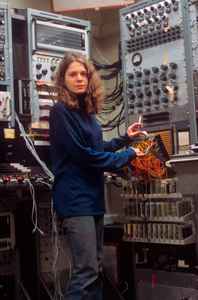 Profile:
Laurie Spiegel was born in Chicago (September 20, 1945) where in her teens she played guitar, banjo, and mandolin, and through them cultivated a devout philosophy of amateur music making. After receiving a degree in the social sciences, she returned to music. Having taught herself notation, she studied classic guitar and composition privately in London with John W. Duarte, then baroque and renaissance lute at Julliard, and composition with Jacob Druckman (who later took her as an assistant) and Vincent Persichetti. She also names Michael Czajkowski, Hall Overton, Max Mathews, and Emmanuel Ghent as important teachers. Having worked with analog synthesizers since 1969, she sought out the greater compositional control which digital computers could provide and wrote interactive compositional software at Bell Labs from 1973-79. She later founded New York University's Computer Music Studio, and became famous in rock music circles for her music software for personal computers, especially MusicMouse.
Sites:
retiary.org, SoundCloud, Facebook, Wikipedia
Variations:
Viewing All | Laurie Spiegel
L. Spiegel, LS, Lauire Spiegel

One of the few American women geniuses of electronica and there are very few if you count Laurie and Oliveros. Her music goes way back to the late 60s when she was using Buchla gear. Later she worked at Bell Labs I believe(same place that Don Slepian recorded the amazing Sea of Bliss).
Laurie's music is more along the minimalist framework i.e. Terry Riley etc but is always interesting and strangely melodic over dissonance. Interlocking rhythmic passages connect and disperse in the course of her compositions always creating a wandering dynamic. One can compare some fo her compositions to the Berlin School sequencer mayhem of early K. Schulze,M. Hoenig et al but she really has her own methodology and its always warm and inviting to the ear.