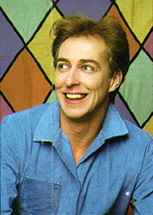 Probably most well known for the 10 years he played keyboards, composed and produced for Split Enz. After Split Enz split up in 1984 he has worked with artists such as Tim Finn, Paul McCartney and Crowded House.