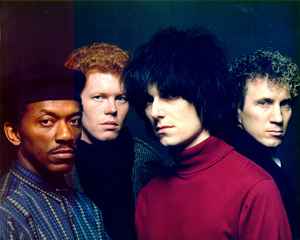 Profile:
American rock band from Sacramento, California. Originally formed as Scratch Band (2) in the late 70s, they changed their name to The 77s just prior to releasing their first album, Ping Pong Over the Abyss (a collection of Scratch Band songs written in the late 70s and early 80s).

Not long after Ping Pong Over the Abyss was release, original drummer Mark Proctor left and was replaced by Aaron Smith (2), creating the "classic" lineup.

When the classic lineup dissolved in the late 80s, front-man Michael Roe created a solo project called 7&7iS (the "i" often written as a stylized apostrophe).

The band reformed in the early 90s, with only Roe and Smith returning. They added Mark Harmon and David Leonhardt to round out the lineup. Harmon and Leonhardt had previously been in a band called The Strawmen (2), and several of their songs were used on the first album from the new lineup, Pray Naked (aka "The Seventy Sevens").

After Drowning with Land in Sight (1994), both Leonhard and Smith left. Former Vector (8) drummer Bruce Spencer joined, and the band continued as a "power trio." As of 2022, this lineup has remained consistent.