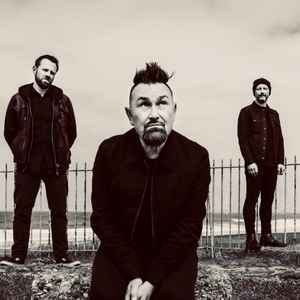 December 8, 2010
Therapy is a band from Northern Ireland. That explains a lot of things.
Although that they have a very hardcore fan basis, they never achieved to be a superband with big audiences. In their case, it was better that it never happened, as they manage to maintain their original and pure sound as their early days. Underground is still their middle name, and they became big only during years 1994-1996 with the two multi selling releases "Troublegum" and "Infernal Love". They still manage to book tour dates with major success especially in Europe, as they were never successful in the United States and the Americans dont know the band. Their first two records, Babyteeth and Pleasure Death were a mix of dark punk noise alternative rock. Following those two releases, Nurse was their third album, receiving success with their top single "Teethgrinder".
Their breakthrough album was Troublegum and after that the Infernal love and they became big and well known to greater audiences. After that and a numerous recording followed with minimum success, such as Semi-Detached,Suicide Pact-You first which were very difficult albums for someone to deal with. Leaving the A& M company, a best of compilation was released as a tribute to those productive years. Shameless is the next album that was recorded in Seattle, US. The rest of the recordings such as, High Anxiety,Never apologise never explained, one cure fits all, and the last but not least Crooked timber, found the band trying to reinvent and rearrange themselves either successful or unsuccessful.

But they will be always remembered as an original and true band without trying to cope with all the trends of the passing times.Funfantastic!
Cheers to this band which has offered so many personal feelings.

If dark alternative rock is your thing, then you would probably like Therapy? While they're not from US, they are so much better than many groups who became well-known during the grunge wake. As far as i know, they're barely known in US, but it doesn't make them any worse - with so many albums in their back catalogue, almost everyone will find something interesting to listen to.