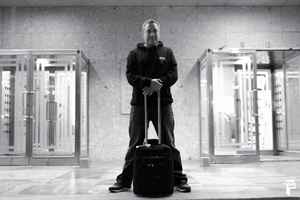 Real Name:
Jason Cambridge
Profile:
Date of Birth: 27th January 1970
Hip Hop, Electro, Soul, Funk, Reggae and Rock, and each and every one of these styles influenced his mind for the future.

In 1992, Jason began to release his own material and go raving to hear his stuff being played out. Whilst at Roller Express one night, he met Ola from The Stage One Music Company and a year later, Ola started distributing Jason's records. As time went on, Jason and Ola decided to set up a record label together, Calling it 'Boombastic Plastic, Jason would release records under the name 'Citadel of Kaos', which was made up of Jason, Jan Salisbury and Simon from Earth Leakage Trip. 'Citadel of Kaos' eventually became just Jan with another guy called George Jones. A-sides also had shows on the pirate stations Unity FM & Conflict FM.

'Sunshine Productions' tunes such as 'Above the Clouds' and 'Symphony In September' were part of Jason's long list of successful Rave anthems released on 'Just Another Label' (JAL). He still felt he had to push himself in other musical directions. Jason wanted to start up his very own label. "I can't stand people who knock other people or just want to jump on the bandwagon. Anyone with a negative attitude does my head in", says Jason, so starting his own label meant he would be in complete control of what he did and who he let in.
In winter 1997, Jason and Ola created a Drum 'n' Bass record label called 'East Side'. Jason has run the label ever since and they have been a solid and successful team. Most of the artists on the label are from the East Side (of London), although Elementz of Noize are from Newcastle and Majistrate is from Kent.

I own two different very very rare DUBPLATES from A-Sides, done by Audiowerker.de. There is no matrix. no title. just the written A-Sides on the label. Clear vinyl. 10inch. there might be not more than a few copies from these ones, perhaps just one. Time around mid/late 90"s. Bought these ones from a d&b collector in 2001. Because of the missing data, it is impossible to put it in the database of discogs. If anyone has interest: send me a message.

July 20, 2014
let me echo what naz said below - plus check his immense tunes as gangster sound - tunes such as 'selector' - only on dubplate but can be found on the strictly hardcore complialtion - 'what's going on' and 'paradise' are just jungle perfection.
'string trips' is also worthy in any collection - and there's a veritable feast of work on Mark Ryder's label - my favourite being 'illusions', dubplate version if you can find it.
but more than anything what I like about him is that he comes across as a really nice bloke who'd help anyone in the scene.
See 1 reply

April 3, 2002
I like to refer to A-sides as the "Jackie Chan" of D&B. Unlike alot of artists, A-sides will come off like the nicest, with a sensual beginning to his tracks, then he'll smack you upside the head, like you just stole something, with his beatz. His Amen-Anthem/Roller amalgam is remarkable, and I consider him to be the best on his East Side label, next to Skeptic. You gotta keep in mind...this is another guy who remixed Waterhouse Dub...don't get confused. I own the Crazy VIP/Dreaming LP, and I suggest anyone with aspirations to be a good DJ go right now and pick it up. As "Dreaming" is a nice Hard "Trance-and-bass" Roller, it is "Crazy VIP" that will get the dancefloor trampled. Look for anything else this guy does and go and get it.