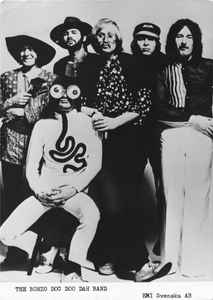 Profile:
The Bonzo Dog Band (also known as The Bonzo Dog Doo-Dah Band, The Bonzo Dog Dada Band and, colloquially, as "The Bonzos") are a band created by a group of British art-school denizens of the 1960s. Combining elements of music hall, trad jazz, psychedelic rock, and avant-garde art, the Bonzos came to the attention of a broader British public through a children's television programme, "Do Not Adjust Your Set". After three reunions (in 1972, 1988 and 2006) a conflict arose with Neil Innes, which led to the spinoff Three Bonzos And A Piano.