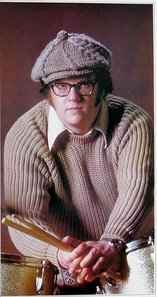 Real Name:
Claudio Pablo Slon
Profile:
Brazilian drummer and percussionist.
Raised in São Paulo, son of a classical violinist and a ballet instructor,
he began recording professionally while still a teenager,
performing also alongside his father in the Sao Paulo Philharmonic.
Slon moved to US after signed with producer Creed Taylor to record in New York
as part of the Walter Wanderley Trio.
Based in California for many years, he moved to Colorado in the mid 90's,
where he died for lung cancer in 2002.