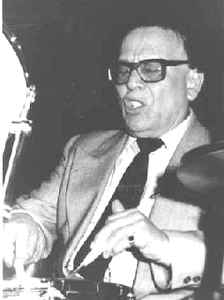 Real Name:
Fortino Contreras González †
Profile:
Tino Contreras (born April 3, 1924, Chihuahua, Mexico – died September 9, 2021, Ciudad de Mexico) Mexican musician and composer. He was born in the city of Chihuahua, Mexico, on April 3. He comes from a family of musicians, mainly his father, Don Miguel Contreras, who was a drummer and director of the first Jazz band in Chihuahua, and his mother, Mrs. Leandra, who liked to sing zarzuelas.
In that environment, Tino began playing drums at eight years of age and at age 15 he became the drummer of the Los Cadetes del Swing orchestra, which he himself formed with his older brother Efrén, saxophonist and director of the latter.
At age 17 Tino moved to Ciudad Juarez, Chihuahua, where he formed his own band, which he called the Youth Orchestra. At the beginning of the 1940s he made his debut as a director and soloist on the XEJ radio station in that border city, and performed at the main nightclubs, alternating with his radio program.
At the end of that decade he emigrated to Mexico City and was part of the famous Caravans that toured throughout the Mexican Republic, and were organized by businessman Paco Miller. They played popular artists of the time, such as Pedro Infante, María Victoria and Tin Tán, among others.
At the beginning of the fifties he was fully integrated as the star drummer of the Orquesta de Luis Arcaraz, considered the fourth in the world, due to the importance of the performing soloists who participated in it, to which his younger brother, Mario Contreras, also belonged. as a trumpeter
He also played in Juan García Esquivel's orchestra, among others, and had an important role in cinematography, both as a drummer and as a composer of musical backgrounds for films of the Golden Age of national cinema, at the same time that he attended his activity in radio programs of the XEW, nightclub and international tours to Central, South America and the Caribbean.
During his stay in the Dominican Republic he met the rhythm of Merengue and decided to bring him to Mexico. He formed the first orchestra dedicated to that musical genre, which earned him the title of El Rey del Merengue in Mexico.
He recorded his first acetate in 1953 with his own compositions of meringues for the Peerless label, called Tino Contreras: Volado por los Merengues, and in this way he introduced what would later be Tropical Jazz or Latin Jazz. He was the first to make this fusion with his own songs, which are recorded on some of his albums.
Tino Contreras died on september 9th 2021.
Sites:
sacm.mx
In Groups:
Cesar Molina Cuarteto, Cuarteto De Tino Contreras, Hector Hallal "El Arabe" Cuarteto, Mario Patron Trio, Orquesta De Estrellas, Orquesta De Tino Contreras, Tino Contreras Y Su Grupo
Variations:
Viewing All | Tino Contreras
T. Contreras, Tino Contreras Y Su Tropical Jazz, Tino Contreras y Sus Hermanos, Tino Kontreras