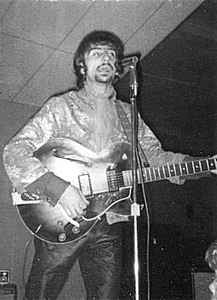 Real Name:
Nicholas Zaharis Pantas
Profile:
Birth: August 21, 1941 - Death: February 12, 1968.
New York-based guitarist known for his work with vocalist Ronnie James Dio through a series of bands from the late 1950's through the 1960s. Nick was killed when he and the rest of his band, the Electric Elves, were involved in an automobile crash (although several sources claim this happened in 1970, Electric Elves keyboardist Doug Thaler, who was also injured in the accident, stated that they accident occurred in February of 1968 in an interview with Dio fansite).
In Groups:
Ronnie And The Red Caps, Ronnie Dio And The Prophets, The Electric Elves
Variations:
Viewing All | Nick Pantas
N. Pantas, Nick, Pantas