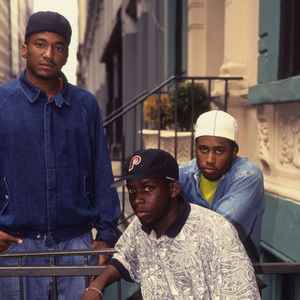 Profile:
This US male rap group originally comprised Q-Tip (b. Jonathan Davis ― later changed to Kamaal Ibn John Fareed in the mid-1990s upon conversion to Islam ― 10 April 1970, New York, USA), DJ Ali Shaheed Muhammad (b. 11 August 1970, Brooklyn, New York City, USA), Jarobi and Phife Dawg (b. Malik Taylor, 20 November 1970, Brooklyn, New York City, USA; d. 22 March 2016, USA). The group formed in high school in 1988 in Queens, New York City, NY, where they started out as part of the Native Tongues Posse, with Queen Latifah and the Jungle Brothers, and were given their name by Afrika Baby Bambaataa of the Jungle Brothers.

Following their August 1989 debut, "Description Of A Fool", they had a hit with "Bonita Applebum" a year later, which was based on a real person from their school. Their biggest success came the following year with the laid-back "Can I Kick It?", demonstrative of their refined jazz/hip-hop blend. Q-Tip also appeared on Deee-Lite's August 1990 hit, "Groove Is In The Heart".

While their debut, "People's Instinctive Travels And The Paths Of Rhythm", was more eclectic, and even self-consciously jokey, "The Low-End Theory" (recorded as a trio following the departure of Jarobi) blended boom bap beats with carefully selected jazz, funk, and soul melodies.

ATCQ was helped considerably by jazz bass player Ron Carter (who had worked with Miles Davis and John Coltrane). Tracks such as "The Infamous Date Rape" stoked controversy, while samples from Lou Reed, Stevie Wonder and Earth, Wind & Fire were used in a frugal and intelligent manner. Q-Tip appeared in the 1993 movie "Poetic Justice" opposite Janet Jackson, and helped to produce Tony! Toni! Toné! (whose Raphael Wiggins made an appearance on "Midnight Marauders"), Nas, Shyheim and labelmate Shaquille O'Neal.

ATCQ was awarded the "Group Of The Year" honor at the inaugural Source Magazine Hip Hop Award Show in 1994 before being moved off stage by the arrival of 2Pac and his Thug Life crew, who were attempting to steal some publicity. Two years elapsed before "Beats, Rhymes And Life" debuted at number 1 on the Billboard album chart with highly evolved lyrics addressing issues with greater clarity as compared to their past recordings.

May 17, 2022
ATCQ, one of the best groups to ever exist in rap. Great beats and great lyrics all around. Thank you for everything, and RIP Phife Dawg.

September 30, 2021
30th Anniversary of the Low End Theory one of the most influential albums of all time.
Wonderful acknowledgement from the Guardian Newspaper: https://www.theguardian.com/commentisfree/2021/sep/29/the-guardian-view-on-a-tribe-called-quest-time-to-pay-tribute-to-the-greats

August 11, 2021
The quintessential hip hop group. There are a few that hold up to the genius that ATCQ were. Perfect vocals, great lyrics and excellent production. RIP Phife. Long live ATCQ!

February 23, 2020
Whoever wrote “US male rap outfit” when referring to Tribe should be banned from writing forever.
See 1 reply

March 23, 2016
RIP Phife Dawg. Without you there never be A Tribe Called Quest for me to listen to as a kid.

September 6, 2007
Possibly, one of the greatest groups to ever face Hip-Hop/Rap music.

Began in 1989 with the 'Description of A Fool' single and cameos on De La Soul's early material. Q-tip, Phife Dawg, turntablist Ali Shaheed Muhammad, and occasionally Jarobi White (the group's answer to Zeppo Marx), Their first album, "People's Instinctive Travels And The Paths Of Rhythm" in 1990 was great, clean, positive fun, with some classics including 'I Left My Wallet In El Segundo'. 1991's 'The Low End Theory', is the breakthrough album for both Busta Rhymes ('Rooah! Rooah! Like A Dungen Dragon') and the Jazz-Rap scene of the early-mid 1990's. 'Midnight Marauders' from 1993 (my personal fave) also followed the steps of the second LP.

1996's 'Beats, Rhymes and Life' is darker (yet still positive), had some nice production from the late J Dilla (RIP). The Group's swan song was "The Love Movement" in 1998, that was lighter, with a "Love" theme on most of the tracks, with the production stylings of the previous LP, and (sadly) later disbanded.

The Tribe (along with Jarobi White) recently re-united for a tour, that ended in 2006.

Along with Gang Starr, De La Soul, Digable Planets and others, the Tribe are the greatest in the Hip-Hop-Jazz Hybrid and Let their legacy live on!!!
See 1 reply