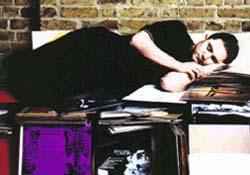 Trax has been DJing since the mid 80s. He started off as a Hip Hop DJ and formed the group Mixrace with Paradox and Leke Aerosoul. He signed to Brain Records in 91 along with DJ Raw and then released with Moving Shadow until 94 when he was involved with the labels Stronghold, Offset, Nautilus and Mobhanded. He is known for being versatile and has released Hip Hop, Downtempo, Breaks as well as Hardcore/Jungle and Drum and Bass. He is still releasing records to this day.