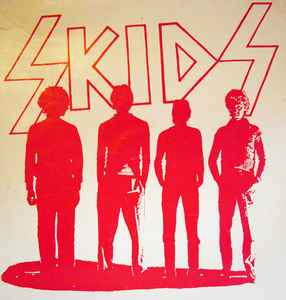 Profile:
Scottish punk band. Formed in Dunfermline during the summer of 1977.

Comprising the songwriting axis of Richard Jobson (vocals) and Stuart Adamson (guitar), together with the rhythm section of William Simpson (bass) and Tom Kellichan (drums), they rode into British consciousness on the new wave backwash to the ebbing tide of punk. The release of their self-financed, attention-grabbing Charles EP came at the time Richard Branson's Virgin label were busy accruing an eclectic roster of post-punk hopefuls. Consequently, with almost indecent haste, the band were tethered to what was to prove an optimistic eight-album deal.

On the flip side of their first Virgin single, "Sweet Suburbia" (1978), the band proclaimed themselves to be "Open Sound", which was essentially a description of the soaring histrionics of Adamson's guitar style. When married to the martial rhythms of the drumming and the bellowing, chant-like vocals of Jobson, this sound conspired to lend their repertoire a rousing, anthemic quality. It was heroic music which at its best, as on the first album, Scared To Dance (1979), seemed to capture the drama and turbulence of battle. Unfortunately, the sound was an all-too-graphic reflection of the band's own stormy relationships, a turbulence which was to settle only with the departure of Adamson in the summer of 1981.

The Skids' decline was in large part due to the portentous designs of Richard Jobson, who sought to mould the band into a vehicle for his ever more convoluted lyrics. This became most evident in the recording of the second album, Days In Europa (1979). Following the departure of original drummer Tom Kellichan in the traditional rock'n'roll style (i.e. after the first album), the Skids recruited a temporary replacement in the form of ex-Rich Kids drummer and Jobson cohort, Rusty Egan, and a producer in the form of ex- Be-Bop Deluxe man Bill Nelson. Together, both Nelson and Egan contrived to free the band from the strictures of punk-pop in favour of a more polished, almost danceable sound. Ultimately it was a case of too many cooks, and the resultant album proved to be a misguided attempt at redefining the Skids' sound. This in turn alienated a great many fans, and also cost them the services of bassist Simpson during the troubled tour that ensued.

For Jobson and Adamson it was back to the drawing board, and 1980 saw a rejuvenated Skids with a new rhythm section in the form of Russell Webb (bass) and Mike Baillie (drums). The resultant album, The Absolute Game (1980), produced this time by Mick Glossop, was a commercial success, giving the band their first and only British Top 10 album. Artistically, too, it heralded a return to form, dispensing with the excess baggage of the previous outing and playing to the dual strengths of Adamson's guitar stylings and Jobson's lyrical bombast. Unfortunately, this rejuvenation coincided with Jobson's increasing commitment to a burgeoning London scene. Adamson's departure had as much to do with geographical differences as to musical and personal ones; a point evinced by Adamson's eventual return to Dunfermline, from where he formed the internationally successful Big Country.

Following Adamson's departure, the final dissolution of the band was soon to follow. Unfortunately, however, not before Jobson and Webb issued a dour and ill-conceived concept album, Joy (1981), which served only to illustrate that, when Adamson left, he took all of the best tunes with him. Not surprisingly the album failed to chart, and proved a sorry end to a short career which had begun with so much spark and promise.

January 12, 2022
I don't agree with the profile at all. It wasn't Jobson's ego that ended the skids there were many other factors involved. Jobson has a big ego on stage which made him one of the best live frontmen I've ever seen but off stage he always struck me as an intelligent and reasonable character. Also the suggestion that 'Days in europa' was a mistake in direction is just pure opinion. This album was a masterpiece of reinvention. The weirdly re-issued black version of the album with slight changes and a couple of different tracks to me sounded better with it's "more polished sound" that the profiler seems to dislike. The skids were never a punk band anyway but people like the author of this profile criticise their quest for improvement without understanding this fact and subsequently the importance of the second album. As Rusty Egan and Bill Nelson were involved you could almost class D.I.E. as a precursor to the new romantic style that was emerging. I saw them live and no less than Billie Curry was playing electric violin with them (punk band my arse). Egan and Currie were big players in the formation of the new romantic and synth pop sound and with Adamson using digit delays and experimental effects on his guitar it elevated their sound way above the same old same old that was post punk. I Don't listen to the first album much anymore I find it has dated. The next two are still relevant even today and of all their albums I think 'days in europa' has dated the least. An incredibly talented band who should be given more credit than they get. Especially by the writer of this profile. Best gig I've ever been to was one of their final gigs before they split which was at 'the venue' in London. We didn't know they were splitting up at that time. Jobson waved a load of us on stage to sing the chorus of 'circus games' and at one point the stage was full of fans and they still didn't miss a beat. It was one of my fondest musical memories. At that time in my opinion they were without equal as a live band and I saw most of the other contenders at that time. I was a mod and seeing the Jam was virtually a religion to me but if I had a time machine and could go back it would be to that final skids gig. They came on with 'happy to be with you' and faultlessly went through the card, I can remember it like yesterday. I was 16 years old then and I'm 57 now so remembering things isn't so easy anymore but I'll never forget that night - what a fucking band.

April 17, 2021
Still one of my favourite UK bands of all times. I have all their vinyl releases in my collection and i still love their songs. Infected by, and still my number one song "A Challenge (The Wanderer)" with it's archaic feeling. Not to forget the beautiful "The Saints Are Coming".

October 21, 2020
If you've been a Skids fan since the 80s like I have, I can really recommend Richard Jobson's book Into the Valley where he talks about his perspective on the whole Skids story. Very interresting. You can buy it on Amazon or read it on Kindle.

The most underrated band of all time. Live or studio. RIP Stuart Adamson.