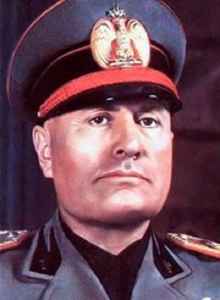 Mussolini came to power as Prime Minister of the Kingdom of Italy on October 31, 1922 and officially became Head of Government, no longer responsible to parliament, on December 24, 1925. After suffering military defeats, Mussolini was dismissed by King Victor Emmanuel III on July 25, 1943. From September 23, 1943 to April 25, 1945 Mussolini still acted as Duce of the so-called Italian Social Republic, a German puppet state. While trying to escape to Switzerland, Mussolini was summarily executed near Lake Como by Italian partisans.