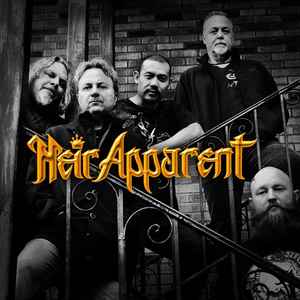 Profile:
The genesis of Heir Apparent began in 1983 when Terry Gorle began auditioning vocalists and musicians after writing three songs ("The Servant", "Dragon's Lair", and "Keeper of the Reign") and receiving very positive feedback from Kim Harris, manager of Queensrÿche. Terry recruited bassist Derek Peace and drummer Jim Kovach, reuniting a trio that had last played together in a cover band a few years earlier. During this time they called themselves Sapien. Derek introduced vocalist Corey Rivers to the project, bringing two songs from their previous band, Helm's Deep ("Hands of Destiny" and "Tear Down the Walls"). During the next 4 months under the name of Nemesis (92), most of the material that would later end up on the Graceful Inheritance album would be conceived. In February 1984, Corey Rivers left the band to concentrate on his career, and vocalist Paul Davidson was recruited for the album recordings that had been scheduled for that summer (Terry and Paul had played in a cover band in 1980 under the name Renegade). This is the point at which Terry Gorle changed the band name to Heir Apparent.
Sites:
heirapparent.com, MySpace, Wikipedia, Facebook
Members:
Derek Peace, Jim Kovach, Klaus Derendorf, Michael Jackson (16), Op Sakiya, Paul Davidson (7), Ray Schwartz, Steve Benito, Terry Gorle, Will Shaw