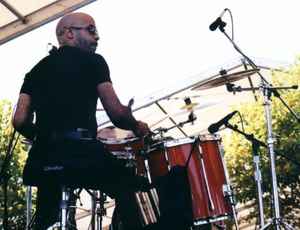 Real Name:
William Laird Johnson
Profile:
American drummer born in Philadelphia, PA. He was the beneficiary of the mentoring of fine players like Gerry Brown and Cornell Rochester on the local scene. He spent a lot of time traveling back and forth between Philly and New York, playing at one time in a band with guitarist Kevin Eubanks and his brother, trombonist Robin Eubanks. It's easy to see why the guitarist Carlos Santana enlisted Billy Johnson on three different occasions to man the traps for tours and albums. He did his first tour with Santana in 1990 and 1991, and then rejoined the band in the summer of 1994 for about two-and-a-half years. Johnson is fleet around the kit, but his most spectacular quality might be his grounding. He throws his roots deep into the music, keeps the drive going while leaving room for the percussion to breathe around him. Johnson performed on Santana's 'Milagro' album in 1992, and the 'Brothers' record featuring Carlos and Jorge Santana. He plays the opening cut on Santana's smash, 'Supernatural', the spirited romp (Da Le)Taleo. Billy Johnson has provided a hot rhythmic bedrock - a steady pulse on Put Your Lights On, the powerful tom work on Migra, some slinky funk on Love Of My Life, and the upbeat Latin-infused rock on Maria Maria and Smooth.
Billy Johnson has played on four albums with Frankie Beverly and Maze, including 'Joy and Pain', 'Live In New Orleans', 'We Are One', and 'Back To Basics'.
Billy Johnson has also been performing with contemporary jazz guitarist Joyce Cooling since late in '96 (and played one track on her second cd, 'Keeping Cool'), and has been playing with the Bay Area pop band Pablo Cruise when time permits.