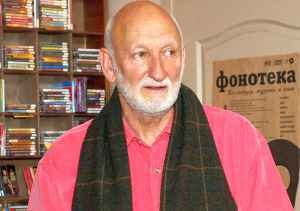 Real Name:
Леонид Самуилович Фейгин (Leonid Samoilovich Feigin)
Profile:
Leo Feigin, or Лео Фейгин (b.1938) is a British producer, founder of prolific Leo Records, and BBC radio broadcaster, known to Russian listeners as 'Alexei Leonidov.' Born in Leningrad, Leonid Feigin graduated from the Lesgaft National State University of Physical Education in 1959, and became a master of sports in high jump in 1960. Feigin later studied English language and philology at the Leningrad State Pedagogical Institute, graduating in 1967. He worked as a translator and had been teaching English at Pedagogical Institute. Not a musician, Feigin was very passionate about jazz throughout his whole life, listening to Willis Conover's programs on the semi-pirated Voice of America radio, and getting involved in the emerging Soviet jazz scene as a concert announcer.

In 1973, Leo Feigin emigrated from the Soviet Union to reunite with Jewish relatives in Israel. One year later, he moved to London to work as a Russian translator at BBC, where he soon became responsible for music and jazz broadcasts, and enjoyed full access to the vast European and American free improv scene. The British Broadcasting Corporation was clearly not taking a full advantage of Feigin's true potential and inexhaustible energy, and soon Leo decided to launch a new record label, aiming to find and produce the most original and innovative improvisation-based new music. In October 1979, Leo Feigin went to New York, where he recorded an extravagant jazz pianist and singer Amina Claudine Myers in New York. Her Song For Mother E LR 100, released in 1980, as well as Humanplexity LR 101 by Keshavan Maslak with Han Bennink and Misha Mengelberg, gave an official start to Leo Records. Another key element for the future success of the label came from Feigin's USSR friends, who wrote about a new mind-blowing Lithuanian avantgarde trio of Vyacheslav Ganelin, Vladimir Chekasin, and Vladimir Tarasov, and even managed to send him a few unreleased tapes. In his interviews, Leonin Feigin recalled playing Ganelin Trio recordings to all high-profile jazz people he met. On one occasion, they listened to the cassette with Manfred Eicher and Steve Lake (2) in Eicher's car parked outside a local jazz festival. At the end of it, ECM Records founder shook his head in disbelief, no way it's a trio. A piano, double bass, basset horn, guitar, flute, saxophone, drums, percussion – how could just three guys play all these instruments in one set?!

Meanwhile, G.T.Ch. Trio saw each sporadic concert abroad (mostly in East Germany and other socialist-friendly Western countries) met with tremendous success: standing ovations, raving reviews from prominent jazz critics, which had been praising Trio for their conceptual performances and unhackneyed, highly-organized approach, in ways opposing a dominating 'free improvisation' framework. But even in the more liberal Lithuanian SSR, which always enjoyed a little additional freedom due to a close proximity to Baltic countries and Northern Europe, USSR officials were quite cautious and disapprobative about the Trio endeavors. Any jazz musician was, by definition, already on the edge of ideological inappropriateness – let alone the ensemble which dabbled in most radical and experimental form of this questionable 'bourgeois' noisy genre, creating something a bit too open-minded, liberating, and provocative. The group was under KGB scrutiny, every invitation from the most prestigious venues in Europe and United States was cross-examined by Goskonsert for months, every approved 'exit visa' was a little fight with the government. On their foreign visits, Ganelin, Tarasov and Chekasin were always accompanied by a KGB watcher, reporting on their activities and behavior. Musicians were humorously describing themselves as involuntary quartet at the time, with the 'fourth member,' so called translator, literally presented everywhere at all times. They already released several albums on Melodiya, and thus were obliged by an unsigned contract with the monopolist label, obviously prohibiting any unsanctioned recordings and albums, especially on the 'enemy' British label created by the ex-Soviet defector. To protect G.T.Ch from any potential legal trouble, Leo Feigin came up with an original scheme – all Leo Records releases appeared as faux bootlegs, with a clear note on the back cover: 'Musicians do not bear any responsibility for publishing these tapes.' In reality, every album was sanctioned and approved by the artists, with as much input from them on particular details as possible. The background story of Strictly For Our Friends LR 120 album, described in liner notes for the 'Golden Years' CD GY 013 reissue, gives a nice example. Leo Feigin received this particular tape during a legendary Ganelin Trio tour across the Great Britain, but it came completely blank: no title, track notes, recording date, nothing. Trying to figure at least the album title, Leo was forced to have a coded conversation with the Trio. Driving them in his car, Feigin started an innocent small-talk with musicians crammed at the back seat with all instruments and gear, while an unsuspecting KGB-appointed translator was relaxing in the front: 'This movie you told me about the other day, do you happen to remember the name?' The band immediately got the hint, and a minute later Slava Ganelin responded: 'Oh yeah, yeah. I think it was called Strictly for Our Friends.'

Since the early nineties, all Leo Records releases were issued on CD, normally in standard jewel case packaging, but a few sub-labels and special editions came in cardboard digipacks. Always claiming that 'the origin of the musicians is not so important,' Leo Feigin featured composers and musicians from all over the world on his label, personally producing, co-producing, and preparing for publishing a vast majority of 700+ releases in Leo Records catalog, including many outstanding recordings by Ivo Perelman, Matthew Shipp, Anthony Braxton, The Art Ensemble Of Chicago, John Wolf Brennan, Sun Ra, Eugene Chadbourne, Evan Parker, William Parker, Marilyn Crispell, Joëlle Léandre, Joe and Mat Maneri, Phil Minton and Roger Turner, Lauren Newton, Ned Rothenberg, Tibor Szemző, Cecil Taylor, Reggie Workman and many others.