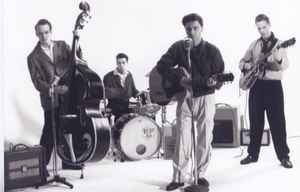 Profile:
The music of The Tinstars can be described as a very eclectic mix of authentic rockabilly, white-rock, pre-surf instrumentals, blues and a bit of hillbilly. Their most important influences are the recordings made for the legendary Sun label (particularly the ones by Sonny Burgess, Jimmy Wages and Carl Perkins) and the many great rare records released on all the obscure little record labels across the United States, which now are to be found on labels like White Label, Bison Bop and Flame. In the repertoire of the Tinstars you can find songs from the likes of Junior Thompson, Carl Perkins, Narvel Felts, Larry Donn, Warren Smith, Roy Orbison, Dale Hawkins, The Berry Brothers, Billy Prager, but also some originals and some lesser known material.

The band started out as "The Tinstar Trio" in 1985, but after changing into a foursome, that name didn't really seem appropriate anymore. But the album "Just Before All Hell Breaks Loose" (released as The Tin Star Trio on Rockhouse Records), marked the end of the period as The Tin Star Trio in more than just one way. In 1990 they changed the name to 'The Tinstars', and with that change of name their style and repertoire also developed towards a more authentic and much wilder sound. This would be the period in which The Tinstars took the musical direction they are now so well known for.

Since then, the Tinstars have many successful shows at clubs in England, Austria, Belgium, France, Czeck Republic, Germany, Sweden, Switzerland, Italy, USA, Finland, Spain, Croatia, Denmark and Norway, The band has also appeared at many of the renowned rock'n'roll festivals, such as the Rockhouse International Rock'n'Roll Meeting (on several occasions), Sunjay's Rock'n'Roll Meeting (Sweden), D-day (the festival in and around the famous Cruise Inn in Amsterdam) the Hemsby Rock'n'Roll Weekender (England) Rockabilly rave, High Rockabilly Fest, Ubangi stomp, Rhythm Riot, etc etc. Over the years, the band has shared the bill with many well known American acts such as Big Sandy, The Cramps, Reverend Horton Heat, High Noon, Dave and Deke Combo, Planet Rockers and Robert Gordon. They also played with many of the original 50's artists as well; Gene Simmons, Sonny Burgess, Hayden Thompson, Sleepy LaBeef, Johnny Carroll, Rudy Grayzell, Joe Clay, DJ Fontana, Ronnie Dawson, Al Ferrier, Billy Lee Riley, Ray Campi, Dale Hawkins and Jack Earls, whom they have all backed up also. They even recorded with many of these rockabilly originators. And closer to home, they´re no strangers to legendary British bands like the Polecats, the Blue Cats, Big Joe Louis, the Deltas, the Blue Rhythm Boys, Crazy Cavan, the Sureshots and Freddie 'Fingers' Lee either. All their achievements have resulted in quite some media attention. They have played and been played on quite a few radio shows, were featured in some of the better known international rock'n'roll fanzines and did several TV-appearances.

The essential and unique characteristic of this band is that they play well known and obscure as well as original material in such an excellent and very different way. They have unique arrangements of the classics, with for instance changes in tempo, sudden breaks or an extra chorus here and there. Besides this, the Tinstars are known for their really wild stage presence. Their spontaneity and energy combined with their superb musicianship resolves in some really great rockabilly and, again, a really wild stage act, with which they have pleased and entertained the crowds for over a quarter of a century now, and will continue to for many years to come.