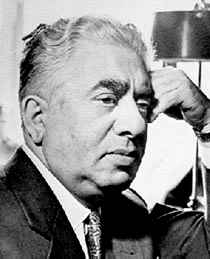 Real Name:
Արամ Եղիայի Խաչատրյան (Арам Ильич Хачатурян, Aram Ilyich Khachaturian)
Profile:
Aram Khachaturian or Арам Хачатурян (1903–1978) was an Armenian composer and conductor, husband of Nina Vladimirovna Makarova (1908–1976) and uncle of composer Karen Khachaturian (1920–2011). Considered one of the leading Soviet composers of the 20th century, he is a national hero in Armenia. He survived the Soviet regime relatively unscathed, but was in turn humiliated and rewarded by it, receiving awards and titles like "People's Artist of the USSR" (1954), "Hero of Socialist Labour" (1973), the Lenin Prize (1959), four Stalin Prizes (1941–50), and the USSR State Prize (1968) - as well as being branded "fundamentally incorrect", being sent into internal exile, and finding himself obliged to make a forced public apology for his work.

Born and raised in Tbilisi, Khachaturian moved to Moscow in 1921 and enrolled in the Gnesin Musical Institute to study the cello. In 1925, he joined a newly established composition class led by Mikhail Fabianovich Gnesin. He continued his studies in composition with Nikolai Myaskovsky in 1929 at the Moscow Conservatory, also taking orchestration lessons from Reinhold Glière. In 1933, he married the composer Nina Makarova, a fellow student from Myaskovsky's class. He graduated from the Conservatory in 1934, and received his Ph.D. two years later.

Khachaturian gained recognition and fame for one of the first major compositions, the Piano Concerto (1936). Other significant works include the Masquerade Suite (1941), Violin Concerto (1940) and Cello Concerto (1946), the Anthem of the Armenian SSR (1944), ballets Gayane (1942) and Spartacus (1954), three symphonies composed from 1935 to 1947, and over twenty film scores. His best-known piece, the 'Sabre Dance' from Gayane, has been covered by numerous musicians and used extensively in popular culture.

During most of his career, Soviet regime gave Khachaturian approval, and he held several high posts in the Union of Soviet Composers. He joined the Communist Party in 1943. Five years later, Aram was named as one of the leading figures of the "fundamentally incorrect" formalist direction in music alongside with Sergei Prokofiev, Dmitri Shostakovich, Dmitry Kabalevsky, Vissarion Shebalin and Myaskovsky. Their music was denounced as "anti-national." Khachaturian made public apology for his "artistic errors" and was sent away to Armenia as a punishment. The decision to ban the composer was entirely in keeping with the dangerously capricious nature of the regime under Stalin, and, ultimately, he did not change his musical style at all. He was rehabilitated fairly quickly, when his music was used for the documentary film Vladimir Ilyich Lenin (1949).

Mis Artistas by Blake01492
Classical Composers by Dr.SultanAszazin
soundtrackers/compositors by flipget26
MEAT by bhcampbell
Artists for the Future by Milesbeet-hoven1
Composer's In My Collection by alantrewhitt1
Favorite Artists by SoulDancer
View More Lists →