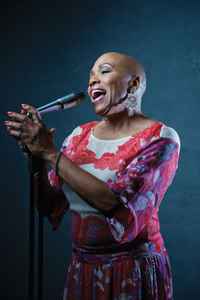 Very few people have Dee Dee's capability, She can weave from Avant garde Jazz to Soft Gospel soul effortlessly and keep a hard core legion of fans constantly engaged with every breath she takes to listen to the sounds she can recreate with such ease.
I do not know of any singers today, who have achieved what Dee Dee has done or can do, it takes supreme understanding and years dedication to get to this level in your art and desired field, She can look at the great singers past and present for inspiration, what you may not have noticed is that other musicians know this, It is almost like a trade secret that collectors of her music and others artists speak in whispers when mentioning her name.
The Afro Blue album has often had tongues wagging, when she sung on Carlos Garnett's Black Love with "mother of the future" the explosive impact of her vocals is breathtaking.
On Charles Sullivan's Genesis Dee Dee sings on a track "Now i'll sleep" this Track is so Heart breaking i want this track played at my funeral it is that awe inspiring.
How she can conjure up such emotion it is hard to imagine much less recreate, "little "b"s poem "is a typical example.
Many people may not know her early career seemed to mirror Jean Carn's as they recorded with similar artists and covered a few of the same tracks.
Dee Dee seemed to play freelance role working with the avant-garde players of the early 70s who got their inspiration from artists like John Coltrane so you can trace her legacy, back to greats that may never be repeated. SO WHILE I AM ALIVE I WILL KEEP HER MUSIC AND SINGING CLOSE TO MY HEART AND SOUL.