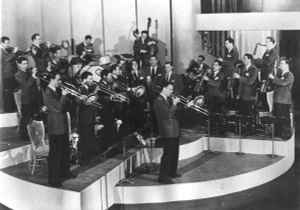 Profile:
Glenn Miller and His Orchestra was formed by trombonist, arranger, composer, Glenn Miller. Glenn Miller was the best-selling recording artist 1939 - 1942. Miller was a sideman in many different groups beginning in 1926 with the Ben Pollack Orchestra. He was overshadowed in Pollack's band by Jack Teagarden who began taking all of the trombone solos. Miller focused on arranging and composing and by 1928 he had already published a songbook. Miller played frequently with other sideman who would become famous in their own rights with orchestras, Jimmy and Tommy Dorsey and Benny Goodman. Making some recordings with "Benny Goodman's Boys" in 1928 for Brunswick, Miller was a free-lance trombonist in several bands such as Red Nichols, Joe Venuti and Nat Shilkret. From the early to mid 30's Miller was arranger and composer for the Dorsey Brothers Orchestra and made many recordings with Bing Crosby and The Boswell Sisters for Brunswick and Decca. In 1935 he assembled the American orchestra for Ray Noble.
Anxious to break out on his own, Miller formed his first orchestra in 1937 and made his first recordings as the Glenn Miller Orchestra for Brunswick, Vocalion and Decca. By 1938 the band was unsuccessful and starving to death and disbanded. He revamped his style and arranging and credited the second and massively popular Glenn Miller Orchestra.
In September 1938 they made their first in a long list of recordings for Victor subsidiary Bluebird Records. In the spring of 1939, after a stint at the Meadowbrook Ballroom and Glen Island Casino, their popularity soared. By 1939 Miller's band was tops in the jukeboxes and was the most popular orchestra until 1942 when Miller went into the service during WWII. From Dec 1939 - September 1942 Miller had a radio program broadcast 3 times a week. His records sold millions and was awarded the first gold record for "Chattanooga Choo Choo" in 1941 as well as being seen in a few motion pictures.

By Joel Whitburn's tabulation, in less than four years the group saw 16 US number-one hits, as well as 6 Australian number-ones (three of which didn't hit top the US charts). The amount of hit singles Miller and His Orchestra had in such a short amount of time proved to be one of the greatest chart runs in history. "In the Mood" became an anthem of the swing craze and the most lasting of even his biggest records. The group sold over 60 million records, the most of any dance band. In the wake of Pearl Harbor, the very patriotic Miller joined the Army Air Forces where he would develop a modern military band for morale raising. The orchestra disbanded to a very emotional crowd at the Central Theater in Passaic, NJ on September 27, 1942. On December 15, 1944, Miller mysteriously disappeared over the English Channel. He was recognized as war hero. The band's music never left the American public; Despite never recording a studio album, Miller and His Orchestra had three posthumous Billboard number-one compilation albums as well as album certifications spanning several countries several decades years after his death at age 40.