The Sure Fire Soul Ensemble 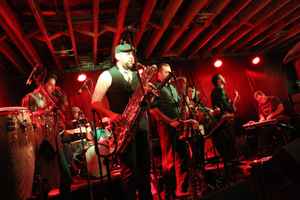 Profile:
The Sure Fire Soul Ensemble is a heavy, original, instrumental soul band based in San Diego. They draw influence from the masters of the style from the past and modern day, including: The Meters, Isaac Hayes, El Michels Affair, Mulatu Astatke, Budos Band, The Nite Liters, Menahan Street Band, Fela Kuti, and The Poets of Rhythm. In June of 2015 they released their debut self titled album on Colemine Records. The album was very well received and made many "Best of 2015" lists including Reddit, Staf Magazine, and KMHD. The album also won a San Diego Music Award. SFSE has shared the stage with Lee Fields and the Expressions, New Mastersounds, Monophonics, Kamasi Washington, and many other touring bands. They perform live regularly all over California and beyond.