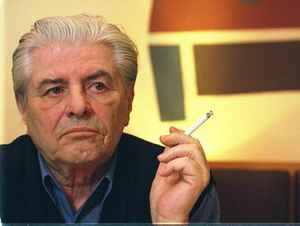 Profile:
Pierluigi (Gigi) Campi (* 15. December 1928 in Köln; † 6. January 2010) was an Italian jazz producer and architect. He is mostly know for producing en supervising recordings by (musicians and groups associated with) Clarke-Boland Big Band. From 1949 to 1980, he ran the famous 'gelateria' cafe Campi in Cologne, which hosted many jazz concerts and soon became an established meeting point not only for local artists of all kinds but also for international musicians. In the 1950's he founded MoD Records and the label Old. Since 1983 he was involved in the renovated Art Deco location 'Alter Wartesaal' inside Cologne's central station. Since 1997 his family also runs the bistro inside the WDR main building.
Sites:
Wikipedia, campi-im-funkhaus.de
Variations:
Viewing All | Gigi Campi
Campi