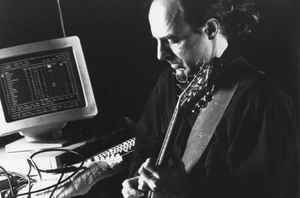 Profile:
An artist who has been called "a composer of moody and elegant scores" by the Village Voice, "sensual and driving" by Other Stages and "elegant and snappy" by the New York Times, Vito Ricci has been on the leading edge of the downtown music scene since 1979.

During his thirty-year-plus career, Mr. Ricci has scored over fifty productions including concert music, theater, dance, performance, film and video. His collaborative works include partnerships with Bob Holman, Martin Goldray, Rashied Ali, Flux Quartet, Jacob Burkhardt, Lise Vachon, and The Woster Group. Performances of his works have been produced at The Skyball Theater, The Public Theater, Greenwich Music House, Cooper Union, Roulette, The Knitting Factory, St. Marks Church, The Performing Garage, the Walker Arts Center and the Southern Theater, both in Minneapolis, and the Sedgwick Cultural Center in Philadelphia.

Mr. Ricci has been the recipient of grants from ASCAP, Meet The Composer, The National Endowment For The Arts and Queens Council on the Arts. He has studied with Ursula Mamlok, Eleanor Cory and Ornette Coleman, and has released CDs of solo piano music, electronic works, song cycles, improvisations and string quartets.

Recent accomplishments include a 6 month residency at the Bowery Poetry Club. Having a two hour radio show by Gandalf on WJFF devoted to his music. Composing the music for and producing the "The Awesome Whatever" a CD by poet Bob Holman. Scoring 4 movies: "Arid Lands", a documentary by Josh Wallaert and Grant Aake, "Murdered" by Terry Ross, "Days Gone By" by John Zhao, "Herbron Holiday" by Jacob Burkhard. Recording a CD of his string quartets "I Don't Know Who I Am" by the Flux Quartet. Producing Lise Vachon's CD "Vocalise", scoring "Philosophies" for the Complexions Contemporary Ballet which went on to tour the world, and the premiering of the "Cicada Journal" with Steve Dalachinsky at Roulette. An electronic chamber opera, "HELP", was commissioned by the Queens Council on the Arts.

Vito Ricci's leading edge instinct and creativity have made him a vital and prolific composer of illuminating and compelling works. Infused with poignancy and honesty, his music has the power to linger in the listener's memory.
Sites:
vitoricci.com
Variations:
Viewing All | Vito Ricci
Ricci, V. Ricci, V.R.