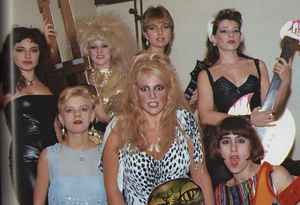 Profile:
Pulsallama was a short-lived, yet legendary, 12 piece, then 7 piece all-girl bass and percussion band who ruled Manhattan nightlife for a brief period in 1981 and 1982. Their sound has been described as “13 girls fighting over a cowbell.” The band often fought with each other verbally and physically in the studio and at shows. The groups rowdy behavior, theatrical stage antics, props and costumes and awkward time signatures were what the New York underground loved most about them.