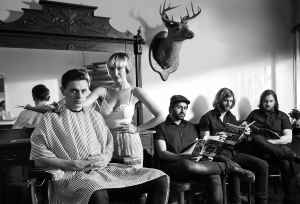 Profile:
Canadian IndieAlternative Rock band.
After getting back from a European tour with his band, Peter Dreimanis met Leah Fay at a bar in Toronto, after which they decided to form July Talk, along with Ian Docherty, Josh Warburton and Danny Miles. July Talk's style of music is a mix of alternative and indie rock.
In 2013, they toured alongside Billy Talent, Matt Mays, Arkells, Sam Roberts and Besnard Lakes, Weezer, Matthew Good Band and Tegan and Sara. In the summer of 2013, they began working on a studio album. In 2014 July Talk was nominated for Breakthrough Group of the Year at the 2014 Juno Awards in Canada.
Sites:
julytalk.com, Facebook, Wikipedia
Members:
Danny Miles, Ian Docherty, Josh Warburton, Leah Fay, Peter Dreimanis