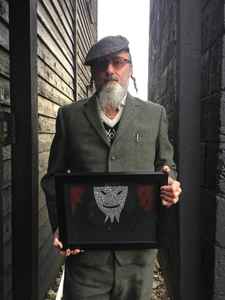 Profile:
Current 93 is a group led by David Tibet with an ever-changing line up of musicians. Michael Cashmore and Steven Stapleton are more permanent members of group, appearing on several releases.

March 19, 2021
Even death is better
Than this useless life - that should be the end.
Reply Notify me 2 Helpful

August 28, 2016
我觉得我需要加上中国人的字（笑）。c93的音乐如同一场漫长独行之后的归家。I am a Chinese and the mystrious melody of them is so fasincating.
Reply  See 2 replies Notify me 18 Helpful

December 24, 2015
I first encountered C93 when Dogs Blood Rising appeared in my local independent record store. I was into PTV/TOPY at the time, was familiar with the name David Tibet, so gave it a go, and loved it. I haven't loved everything he's done, and I have sometimes found pricing to be a little high on some things, but having seen the band several times in London in the last few years I still find them enthralling. I loved I Am Last Of All The Field That Fell, and last night when I got home The Moons At Your Door was on my doormat. There is constant evolution and reinvention in David's work, and it won't work for everybody, but it works for me. I've seen some comments here about other artists related to C93, such as NWW and DI6 (Death In June and what came after...). I don't always like what Steven Stapleton does but he's produced some real gems, and the work of Douglas Pearce, Tony Wakeford and Patrick Leagas has gripped me since Only The Guilty Have No Pride, in all their guises. Although these artists no longer work together (except Steven and David), their work is the finest on the scene in my opinion.
Reply Notify me 6 Helpful

April 16, 2015
Being a huge fan of NWW I am sad it took me so long to fully embrace Current 93... Having done so, I have been fully rewarded with TOTAL AWESOMENESS to my ears and mind. LOVE this collection of artists, led by David Tibet, and all of their output. Strange, beguiling, eerie, unsettling, bizarre, mind numbing, scary, funny. Wonderful!
Reply Notify me 7 Helpful

September 10, 2014
Having only discovered C93 for myself about three years ago, and having listened to these recordings almost non-stop since, especially my favorites from Thunder Perfect Mind up to Black Ships Ate the Sky (I like Cashmore's significant contributions in this period, and Stapleton's), but others as well, from the early days to the latest "I Am the Last of All the Field..." I have to say I've not been so excited about any one artist's work in a long time. I'm getting close to fifty and can't believe I missed this until relatively recently. I don't love all of it, but there is much that is sublime in this large and diverse (musically, at least) body of work.
Reply  See 2 replies Notify me 1 Helpful

August 17, 2014
Been listening to C93 since around 1990. Saw them play this live in London this spring and thought they were brilliant. I really really like the new album. Its really good.
Reply Notify me 1 Helpful

July 12, 2014
You're all right! Current 93, David Tibet are captured in a never - ending story!
I missed the god all times with those records as "Island" with HÖH!
Or remember such good songs as "A Gothic Love Song" Not so confusing, more into being
of the things. You can lost track if you dig too much for occultism or other religious divergence.
I be emotionally involved with bands like Dead Can Dance, Lisa Germano, Cindytalk, Radiohead,
Lisa Gerrard, This Mortal Coil, Cocteau Twins etc. But each to his own!!

June 1, 2014
All these words about those Bands Current 93,Legendary Pink Dots,Steven Stapleton,Death in June,...add Sol Invictus,Coil,Christoph Heemann,Swans.....Andrew Liles...etc....are really sad.Coil Members are all dead-will not grow old anymore...Their Music would be in the same state like the other fellows.Current 93 does not excist anymore ....just David Tibet....I saw David Tibet with friends as "Current 93" in Berlin this April 2014...Oh my god what is this?This was a non harmonic group with most old music freaks,a pathetic singer,horrible drummer....and ...no memories of the good old days...although they played some old songs---Hits!---no heartbeat-no feeling-no emotion in this concert...just a show.....The Legendary Pink Dots(god,love this band for decades)did their gig in Cologne much more better than Current 93(about 500 -600 guests at Volksbühne),the maybe 50-60 guests of the Dots got an old feeling with the right place for a concert from a underground band....it was possible to dance!!!-Current 93 gave a static sit in meeting....The Dots Sound was fresh,Edward gave a great performance with a light in this night of honesty,Phil did the merchandising it was familiar....Money??? Dots 13 Euros Current 26Euros ....Edward with love and words after the Concert in the audience David with an empty bottle of white wine (may be water in it....as part of the show...)made his concert to an end with borders and questionmarks....???....yes Tibet grown old that was my opinion,too!Edward will carry on his really honest music through the times.....without Patricks violin(wich is sadly missing) and Niels on the blowing things.....this is the difference Edward born in 54 ....a lot of years older than Tibet....so you can see:not the age of the artist makes the feeling of an -old-grown-music.... .......at least look at Neil Young....!!!
Reply  See 3 replies Notify me 7 Helpful

Dear me, after all Sir Cat-A-Lot is just following his creative line as an artist and definitely is no-one you should tolchock each other for - so much only for the preparty ;0)!
Indeed I share enfantterrible's fate in a way: on that ded-letter-day I entered the folk-apocalyptic universe of David 'Late' Tibet, he became one of my musical heroes within the wink of a breath; and as all this happened in the 90's, I as well survived even that period, when enfantterrible jumped off the Davy train.
But all those bands like Current 93, D.I.J., Nurse With Wound and not to forget the Legendary Pink Dots share one thing, finally - they have grown old! And, discogs guys, provided you too will still need your monetary income after having passed the age of 50, tell me:
how creative will you probably be by that time?
So it surely is not wrong to say, there's some lack of creativity in parts of what David, Douglas and Edward currently do; and it additionally is not wrong to say on the other hand, David Tibet - next to Steven Stapleton - seems to make quite some money especially out of what he sells as art objects and signed memorabilia to willing collectors. But none-the-fucking-less, aren't those geriatric lords of goth still great and unique in how they try to place their inmost light, their premonitions and even their war-fashioned blindness as close to us, the audience, as possible? How many artists like them do we have in our world to save us from getting un-brained by pop-plastic surgeons under the aural anesthetic of format radio?
All in all I am but happy to have guys like them. And when I will stop being happy with their music one day, I hope I'll be able to stop buying it. That's all, you magicks!