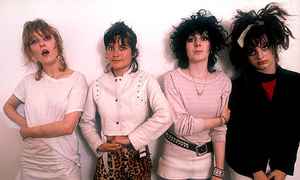 Kate Korus was sacked and went on to form the Mo-dettes and Gutsy quit to team up with the Flicks. They were replaced by guitarist Viv Albertine and bass player Tessa Pollitt and it was this line-up that supported the Clash during the spring of 1977.

The band were known for their uncompromising attitude and professed lack of technique, but their music was as aggressive and confrontational as the best of the punk fraternity. Their failure to secure a record contract during the first wave of the punk explosion was surprising. By the time they made their recording debut, Palmolive had been ousted and replaced by Big In Japan percussionist Budgie (b. Peter Clark, 21 August 1957).

Signed to Island Records, they worked with reggae producer Dennis Bovell on the dub-influenced Cut. The album attracted considerable press interest for its sleeve, which featured the band naked, after rolling in mud.

The departure of Budgie to Siouxsie And The Banshees (replaced by the Pop Group's Bruce Smith) coincided with the arrival of reggae musician Prince Hammer and trumpeter Don Cherry, whose very young stepdaughter, Neneh Cherry also joined for a short period. A series of singles followed, including a memorable version of John Holt's "Man Next Door".