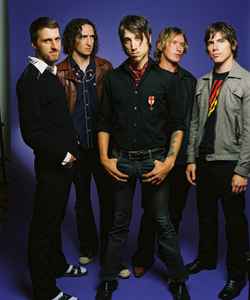 Profile:
Alternative rock band from Auckland, NZ. Their début album, Redlight Syndrome was released in 2001 by Antenna Recordings, however their second, Pipeline Under The Sea was delayed by legal disputes with their label and saw a move to EMI. The album was eventually certified double platinum in NZ and their third, Sunken Water, was released in late 2007.
Sites:
audioculture.co.nz, Wikipedia
Members:
Matthias Jordan, Michael Franklin Brown, Mike Hall (3), Milan Borich, Tim Arnold (2)

January 11, 2008
Pluto make the same sort of dreary pop-indie-rock that New Zealand has been pumping out for years. Nothing fresh or original.

Their first album flopped, and when the second album finally came out, there was a lot spent of marketing, much of it claiming that their first album was "critically acclaimed" but mysteriously didn't sell well to the public. Of course, all this marketing push by their new label did manage to sell a bunch of units of their second album.