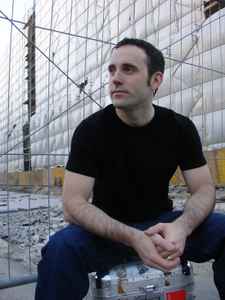 Real Name:
Daniel A. Curtin
Profile:
Dan Curtin began his music career in 1992. His fascination with music was sparked ten years earlier when he discovered the burgeoning hip-hop movement. Hip-hop, along with new wave, electro, and other sonic innovations of the Eighties began to loom largely in his life, and it was only a matter of time before Curtin began experimenting with music creation himself. When he finally heard the futuristic sounds of house and techno, everything changed. Drawing influence from stargazing evenings with a telescope and late night drives through nearby Cleveland, Ohio; music production became Curtin's primary focus. Cleveland, a city not known as a hub for house music creation, was initially isolating. However, Curtin was able to observe the more prominent scenes of other cities without becoming part of or being identified with any one of them. He began designing a new sound in techno and house music.

Curtin's first few records were released on Detroit's now defunct 33 RPM Records and Belgium's Buzz Records. Shortly thereafter, he started his own label, Metamorphic Recordings. Dancers and listeners alike began to take notice of his innovative sound signature, and before long Dan Curtin found himself being hailed as a key player in techno and house music. With his profile on the rise, he eventually caught the attention of Peacefrog in the mid �E0s. His releases under his own name and his Purveyors Of Fine Funk guises were welcomed with open arms by the worlds techno fraternity, many of which becoming key cuts in many a DJ's set for years following their release. Releasing three albums over a two year period 'Silicon Dawn, 'Web Of Life' and 'Art & Science', Dan Curtin has defined himself as one of the key players in the development of techno as we know it today
Sites:
metrecs.com, ascap.com, Facebook, lastfm.fr, MySpace, SoundCloud, Twitter, YouTube
Aliases:
Apogee, Entity (7), Lucky Charm, Planetary, Plasm Nesonic, Prototype (7), Time Undefined
In Groups:
Key Of Soul, Like This Productions, Purveyors Of Fine Funk, RTA Movement
Variations:
Viewing All | Dan Curtin
D. Curtin, D.Curtin, DC, Dan Curtain, Daniel A. Curtin Jr

November 10, 2018
Dan generally has a very distinct sound that I don't think anyone else has or will ever have. Slightly higher bpms than what was/is the norm, frantic drum programming, lots of quick schizophrenic arrangements, the odd 8 bit distorted break and lots of (for lack of a better term melancholy) machine music emotion.
Reply Notify me 2 Helpful

Mr. Curtin ... It is completely safe to say that this man is a musical genius. Everything he makes and has made is on the cutting edge, even the heavily dated material is still relevant (because he goes far into the past, for techno that is .After a career spanning as long as his ,he is still making incredible stuff. a must for people shaping their techno mind. I have never been blessed with seeing him live . I'm from the Midwest and seen a many a dj

July 10, 2008
Mr. Curtin is one of my all-time-favorite producers in the deep techno genre because of his unique ability to satisfy the intellect and the drive, the mind and the stomach all at the same time.
Almost everything he does is just so balanced, driving, never boring and full of surprises and atmospheres.
And he has a real distinguished sound as well.
Take any Dan Curtin record out of any year from 1991 to now and put it on and you will be able to identify it as a Dan Curtin record after a few bars. Unique and inspiring.

July 9, 2003
mr curtin is class, crosses genres etc.
the man makes electronic the way it should be done.
have a listen, no minimal nonsense, no kick hat mince(forgive the phrase it's a local thing).
music with a bit of substance for almost ten years, it must make some of you mills, hood wannabees blush.
sort it out.
Reply  See 1 reply Notify me 4 Helpful