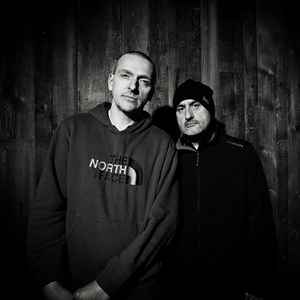 Profile:
Experimental and influential British band, formed in Birmingham in 1988 by former Napalm Death and Head Of David member Justin Broadrick and G. C. Green. They were one of the first bands that combined metal riffs with drum machine rhythms and are highly regarded as pioneers of industrial metal.

May 11, 2019
Which proximity can we find between Godflesh and Swans ?
Reply  See 2 replies Notify me 2 Helpful

Anybody knows why the Post Self album is not listed under Albums?

It's really crap that one of Earache's most important bands doesn't get any FDR reissues. Come on Digby you know they deserve it.

January 5, 2018
I first heard Godflesh blaring from the kitchen back door of the restaurant I worked in. The cook was jamming Streetcleaner right when it came out. I stood outside and could not believe how heavy this music was, or Satanic, in the most pure and uplifting sense. That record was massive.
Reply  See 1 reply Notify me 9 Helpful

Used to love these guys. Amazing recorded works and even better live in the right place with the right sound. Managed to see them in Liverpool in 1992 and they played with the Mick Harris (Napalm Death) on drums playing all the drum machine parts totally spot on. One of the most intense and best live performances I ever witnessed an I've seen thousands.

I first heard of Godflesh in the early '90's reading guitar magazines and I read one article that had Kirk Hammet and Joe Satriani proclaiming Justin as one of the best guitarists in metal. I was stunned at such high praise coming from two guitar gods. If i recall correctly i think "Selfless" was the first disc i bought and that was it i was hooked right there and as quick as i could and forever after i scoured my local record store for imports etc. I believe Godflesh to be one of the most underrated, over looked and forgotten bands in metal. Broadrick's influence on other bands across the world is massive. One of the saddest days for me was hearing JKB disbanded Godflesh i think around 2001 and i had heard that he had a panic attack and had locked himself in a hotel room in the middle of a tour and refused to carry on..
I wish Justin and GC Green the best of luck and would like to say thank you for all the music over the years.

Godflesh are undoubtedly one of my main influences. Like other bands that went on to become some of the more significant musical landmarks in my life, I was first introduced to Godflesh when listening to John Peel (R.I.P.) on Radio 1 at the very end of the 1980s. He was playing their first Peel Session, appropriately.

Godflesh definitely lit my path towards electronic music. A militant death metal / hardcore punk listener at the time, no other band could have introduced the stiffly quantised sounds of a drum machine to me - the sheer noise, darkness and intensity of "Streetcleaner" had me hooked from my first listen. Discovering that founder member Justin Broadrick had appeared on the debut LP of another favourite band, Napalm Death, consolidated my interest.

I saw them live at least 3 times, most recently in 1991 with Mick Harris guesting on "real" drums. Their live show was immense. Shattering waves of distortion, gut churning bass, and those imposing, almost military rhythms coming from the box that would inspire the odd "get a real drummer" shout from the more orthodox metal elements in the audience.

Like his occasional production partner Kevin Martin (with whom he has recorded as Techno Animal), Broadrick has remained constantly fresh in his approach and output. Godflesh retained its sound while evolving throughout the 90s. With Godflesh now part of musical history, like Martin he continues to wow people with his current projects.

April 29, 2003
Birmingham's greatest sons since Black Sabbath. It's only fitting that Godflesh, the most innnovative band for heavy guitar-based music in the 1990's, should come out of that city. Stretching from the Swans-influenced early output to the techno-mergers of their later work, these guys (Justin Broadrick and G. Christian Green) not only defined the hard, bowel-crunching "metal" that is out there now, they became it's de-facto godfathers. The family tree that Godflesh belongs to is quite immense and multi-faceted. The best website for to see the whole scene is www.crumblingflesh.com, one of the web's longest running and invaluable resources for this genre. Starting with Godflesh, of course.