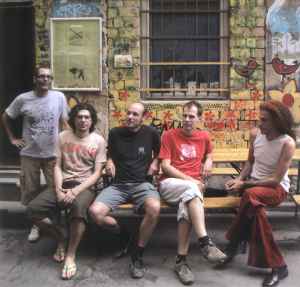 Profile:
Born out of the need for experimentation PALYRRIA is a band that has devised and perfected its own, unique musical style. Created in 1999 Palyrria indulged in a mixture of western electronica and traditional music from around the Mediterranean. They call it world-electro and indeed this music is neither electronic nor ethnic. PALYRRIA has always been fascinated by traditional music and some of the bands members have worked with renowned traditional musicians, but living in Greece one realizes that traditional music goes way beyond the last millennium, back in times when people chose to express themselves in much more ecstatic and pagan ways. Ancient ceremonies around the Mediterranean have always been filled with music and musical expression. In a way, it wouldn't be too far from the truth if one was to draw a parallel between those events and the rave parties the world witnessed in the beginning of the nineties. The similarities are striking and have been the source of inspiration for the dynamic musical context of PALYRRIA. Aeolian scales, pentatonic music, instruments that come out of the depths of history, are presented alongside pumping bass lines, techno grooves, vocoders, clicks and cuts, in an attempt to create music that transcends the centuries and is both ancient and futuristic at the same time. Let the strangeness ware off and enjoy music that comes straight from the source.
Sites:
MySpace, Facebook, Facebook
Members:
Artemis Kangas, Dimitris Tsoyrgiannis, Panayiotis Caperneka, Panayiotis Katsikiotis, Yiannis Nissidis, Κώστας Μουρούλης