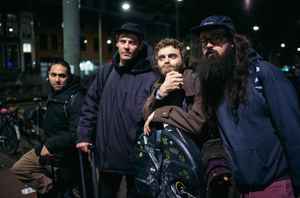 Profile:
American Avant-Garde music group founded in 2000 in Brooklyn, New York. Their music has described as "brutal-prog", "brutal chamber", "post-minimalism" among others. They have said their music is sometimes either very loud or very soft and also says on their website that "it is primarily concerned with making music that challenges the physical and mental limitations of both performer and listener. Manipulating extended technique, unique instrumental synthesis, and near telepathic communication, Zs aims to create works that envelop the listener and unfold sonically over time, evoking unspoken past, present, and future rites and ritual."
Zs was formed in 2000 and released their first record on Troubleman Unlimited through their Vothoc imprint curated by Mick Barr in 2003. On their first release they were a sextet and has since been reduced to a quintet, quartet, and a trio. They received some critical acclaim with their album "Arms" released in 2007 and received even more attention when someone had sent the album to Howard Stern and Howard Stern played it on his radio show while they laughed and ridiculed the group. In 2008 long-time member and guitar-player Charlie Looker left the group to focus on his own group Extra Life. They are currently a quartet consisting of the only remaining founding member Sam Hillmer (tenor saxophone), Ian Antonio (drum set), Ben Greenberg (electric guitar) and Amnon Freidlin (electric guitar). They are currently on The Social Registry.
Sites:
MySpace, Wikipedia
Members:
Alex Hoskins, Alex Mincek, Amnon Freidlin, Ben Greenberg, Brad Wentworth, Charlie Looker, Greg Fox (2), Ian Antonio, Matthew Hough, Michael Beharie, Patrick Higgins (2), Sam Hillmer, Weasel Walter
Variations:
Viewing All | Zs
ZS