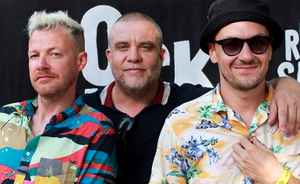 Profile:
Birdy Nam Nam is a group of French DJs: Little Mike (3), Need, DJ Pone and Crazy B. And while those names have been around in the French underground for ages, on the posters for the biggest parties or behind illustrious rap groups (particularly DJ Pone, who officiated in the shadow of Triptik and now accompanies Svinkels, or Crazy B, formerly hidden behind Alliance Ethnik), they also shine on the podiums of the international deejaying championships. They won the DMC World DJ Team Championship in the year 2000 with their crew Scratch Action Hiro. That is the gigantic mutant crew that gave rise to Birdy Nam Nam, a group of 4 scratcher brothers trained for the 2002 World Championship, which they won right in stride. After that, and even if they don't have to prove anything else in competition, having left the circuit in 2002, they continue walking up and down over the grooves of thousands of records.
Since 2005, they have made their first album entirely created on the turntables !
Sites:
SoundCloud, Facebook, Twitter, YouTube
Members:
Denis Lebouvier, Little Mike (3), Mickaël Dalmoro, Nicolas Vadon, Thomas Parent
Variations:
Viewing All | Birdy Nam Nam
BNN, Birdie Nam Nam, BirdyNamNam