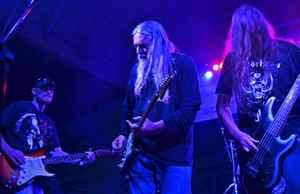 Profile:
Jack Hammer have been pounding down the highway since 1984 and show no signs of slowing down. This South African band has always stayed true to its original brand of Rock and Roll, and has toured and recorded over the years, never seeking the limelight but always playing their hearts out.
Fiercely independent, they have somehow survived the strange machinery that is the South African music industry and produced some sterling original albums over the years. Since their first performance way back in 1984 the one constant factor in the band has been the man affectionately known as "The Hammer", Piet Botha.
Sites:
jackhammer.co.za
Members:
Billy Bob Thornton, Gabi Le Roux, Kenny Henson, Lanie Van Der Walt, Mike Faure, Piet Botha, Rupert Mellor
Variations:
Viewing All | Jack Hammer (7)
Piet Botha En Jack Hammer