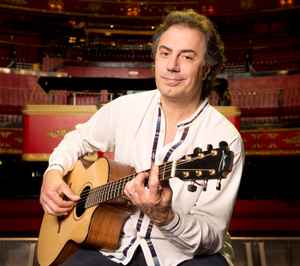 Profile:
French guitarist, born 30 October 1957 in Oran, Algeria. As Sephardic Jews, his family came from Spain, Spanish Morocco, and French Algeria. He moved to Paris with his family when he was four years old. He studied piano and classical music at the age of seven. Four years later, he began to teach himself guitar after his father had bought him a steel string acoustic guitar and a classmate taught him "a few chords". At seventeen, he signed a contract for his debut album, Près de Paris, which won the Grand Prix du Disque at the Montreux Festival.

Bensusan uses DADGAD tuning system and electronics, such as delays, distortion, and volume pedals. He has stated that he became interested in playing in DADGAD because of its "mystical" and "romantic" quality which made him feel like he had gone back to the 16th or 17th century.

He includes scat-singing in his compositions, both composed and improvised. He has collaborated extensively with saxophonist Didier Malherbe. He performed the song "ELM" for the Cowboy Bebop soundtrack Cowboy Bebop No Disc for Yoko Kanno.

In 2006, Bensusan contributed his song "Falafel a Montsegur" to the album Artists for Charity – Guitarists 4 the Kids, produced by Slang Productions, to assist World Vision Canada in helping underprivileged children.

January 31, 2019
Brilliant artist with heartwarming, heartful music. Wish him the best success and more new compositions for us.