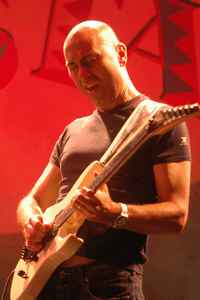 Profile:
Carlo Pasceri was born in Rome in 1964 and studied guitar from the age of 14 years. He is a teacher, composer, arranger and guitarist in various musical projects, ranging from Rock to Pop, from Jazz to Electronic music.

He has worked as a session musician in various records and film soundtracks (including Carlo Verdone's C'era un cinese in coma). He has taken part in several television and radio broadcasts in which he also played with musicians such as Giovanni Tommaso and Martial Solal.

In 1990 he won the European competition "Young Talents of Jazz" organized by RAI and chaired by a pool of Italian and European critics and musicians as a result of which it has been formed an orchestra of 23 elements directed by American composer and arranger James Newton. The orchestra has also performed as a result of the RAI auditorium Foro Italico going live on radio RAI and has subsequently been released a CD.

In 1990 he obtained the certificate of Berklee School of Music in Boston, and began his professional career as a teacher of music at specialized schools and privately. In 1991 he was a finalist in the national competition of mainstream jazz guitar "Eddie Lang", after which he performed with his quartet in Isernia at "Eddie Lang Jazz Festival" taking part in the evening which was broadcast live radio broadcast on RAI 1. In 1992 he was again a finalist for the mainstream jazz guitar competition "Eddie Lang".

From 1992 to 1994 he toured with singer Marina Rei. In 1995 as a soloist released his first CD Blue Challenge, an instrumental album issued by TGE Publishing Group, with only a song sung by Carla Marcotulli.

In 2001 he toured with Bobby Solo. In 2005 he founded a group of instrumental music called Curvatura 9 with whom he recorded a CD that was released in 2006 by the label Soundfactor.
Sites:
carlopasceri.it
In Groups:
Curvatura 9