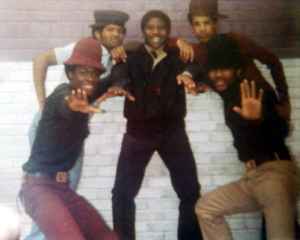 Profile:
South Bronx natives, The Imperial Brothers, began in the early 80’s performing at shows and park parties with the likes of Afrika Bambaataa, Doug E. Fresh, Whiz Kid, Kool Herc, etc. Originally known as the Imperial 5, the members were Mark Ski, MC Scavi-D and Mr. Ice, who were friends from their early teens, Soul Supreme Mean Gene, OG Rock and Prince Master Rhymes who was introduced by Mr. Ice. The group also had casual members such as Brother B of The B-Boys, Dizzy Dee, Too Swift & Jay Cee. Following the incarceration of Prince Master Rhymes the group became the Imperial 4, however, due to the comings and goings of the casual members a decision was made to lose the number and call themselves simply The Imperial Brothers. Together with their DJ’s Disco Dee and Doc Savage only Mark Ski aka El Don, Mr. Ice, OG Rock and Soul Supreme Mean Gene aka Chedda actually featured on any recordings. All the artists names including the DJ’s are etched into the runout groove on the B side of We Come To Rock.
The group signed a 5 year deal with brothers Aldo and Amado Marin’s Cutting Records in 1984 and released their debut track 'We Come To Rock'. which was produced by Hashim and Aldo and engineered by Jay Burnett. ‘We Dub To Scratch’ also featured the DJ skills of Whiz Kid (RIP).
As of 2007, El Don and Chedda reunited and were making tracks appearing on Smack dvd and New york mixtapes. They were reportedly working on a comeback album with Bad Habit Muzik a label based in France.
Members:
Aldo Marin, D. Wallace, Jerry Calliste Jr., Mean Gene, O. Gilliam
Variations:
Viewing All | Imperial Brothers
Imperial Bros