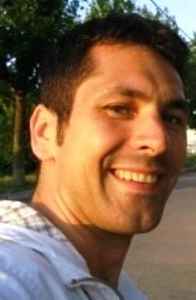 Playing since 1996 in "Studio Martin" with the project named "Fire In Water" as live performances. The style of the project was acid breakbeat balanced with techno house music.

His philosophy, in the 90's was that "Music is the best drug", fulfilling the need for excitement. In the new millennium he got in touch with the Word of God and have the philosophy that "Love is the message". The relation with his wife, Erika, brings him much fulfillment and balance.

After the 90's era of live performances and dj performances, Cristian decided to work mainly in the studio. Between 2000 and 2004 concentrating on advertising and movie soundtracks.

Anyone aware of a track named 'Rightorium' by this artist? I head it on Pandora and love it, but can't find it on any release. Pandora says it's from Various - Global Underground Afterhours 3 but I don't see it there.

Cristian Paduraru is one of the more talented and freshest of the new breed of progressive electronica artists. While most use tired, boring formulas to create uninteresting 'deep prog', Paduraru seems to put a little more juice and love in his tunes.

His tracks are full of energy and life-giving vibe. Each track seems to have a unique character of its own, and sometimes tracks seem to continue in sequels (for example Developing Creativity sounds like a refined version of He Knows His Creation which is truly a joy to hear).

This man can be techy, he can be funky, he can do raw breaks.

I look forward to anything the man puts out...