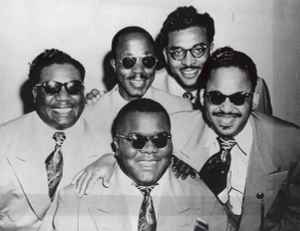 Profile:
The Blind Boys of Mississippi are an extraordinary grouping of blind singers, most of which originate from the Magnolia state. Initially called "The Jackson Harmoneers", they fronted the high pitched screams of Archie Brownlee (October 25, 1925 - February 8, 1960). Other original members include Lloyd Woodard, Lawrence Abrams, Joseph Ford, Jesse Brown, and Isaiah Patterson. When Brownlee graduated high school, Brown and Patterson had dropped put the group, but the rest of them decided to tour professionally.

They recruited Melvin Henderson as their second lead and 'eyes'. Henderson used his connections to get them booked in Chicago for a few concerts, here Archie was mesmerized by the work of R.H. Harris. Even to the point of imitation. When the group got back to Jackson, Henderson quit and Percell Perkins took his place. Perkins' first act of business was to get a recording deal with Excelsior. They recorded eight sides there, none of which reached the potential they held.

The following year they recorded with Coleman records in 1948. There they recorded "Never Turn Back" and "When God Dips His Pen", and the single did exceptionally well, and "Must Be A God Somewhere" also drew attention. In 1950 they signed to Peacock, in September of that year recorded "Our Father", which eventually sold a million copies, earning the Blind Boys a gold disc.

Over the next five years they saw great chart toppers such as "Old Ship Of Zion" and "Save A Seat For Me". In 1956, they signed on with Vee Jay Records. The Vee Jay years (1956 - 1958) marked the end of gospel's golden age, yet the pennical of the Blind Boys success with "I Never Heard A Man" and "Leave You In The Hands Of The Lord". In 1959, they returned to Peacock and recorded about 8 tracks before breeching contract and cutting a single for Marathon Records. This single would prove to be Archie Brownlee's final recordings before dying of pneumonia at age 34.

Luckily, Brownlee handpicked Roscoe Robinson to fill his position. They laid two songs to wax before releasing an album for Checker in 1961. The next two years Roscoe led treasures of gospel like "Sending Up My Timber" and "Tide Of Life". In 1963, after seeing the dawn of the breeched contract scandal, Robinson split and recorded a single for Constellation with Lawrence Abrams and the Blind Boys of Ohio.