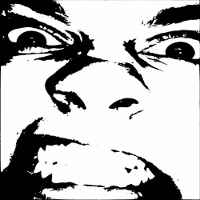 Profile:
Harsh and powerful sounds mixed with fast, complex and irregular drum flavoured noises.
No samples and not external inputs: all sounds are made by synthesize and modelling raw waves from the Gameboy sound chip.

bio:
=================================
Memero is an italian gameboy-breakcore musician based in the Berlin.
His music path starts in 1998 playing guitar and writing songs in indipendent, punk and experimental bands.
In 2006 he moves to Rome where the free tekno and breakcore scenes radically change his approach to the music production: software like Renoise and Pure Data give him the chance to explore sound synthesis basics and start an endless research in the creation of complex rythms.
In 2007, getting inspired by hardcore chip musicians like Dogmatech and Dj Scotch Egg, he gets his first LSDJ copy and a Gameboy (the first ever!) and starts releasing again
his creativity in this limited-but-inpiring environment.
Memero works are linked and released on lo-fi hardcore music record labels like Killbot (AU), Datathrash (USA), Rainbow Diving Butterflies (De), Various Vegetables (De), and Rexistenz (It).
At the end of 2013 the australian Killbot Records released the "Spaety" record with two Memero`s "Squarewave Injection" tracks selled then in the Praxis Records shop in Berlin.
Memero is currently self producing his music on vinyl and playing live in squat basements and underground clubs.
Sites:
memero.org, closebrace-m-openbrace.com, SoundCloud, Bandcamp
Aliases:
1kpieces
Variations:
Viewing All | Memero
Memero (Closebrace M Openbrace)