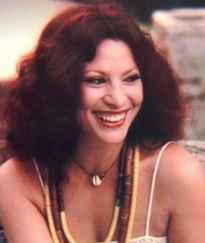 Real Name:
Clara Francisca Gonçalves de Araújo
Profile:
Clara Nunes (August 12, 1943 – April 2, 1983) was a Afro-Brazilian singer, regarded as one of the greatest of her generation. She became the first female singer in Brazil to sell over 100,000 copies, and her achievements in the samba genre earned her the title of "Queen of Samba".

Nunes was also a researcher of the rhythms and folklore of Brazilian popular music, and traveled several times to Africa to search for the roots of black music. Familiar to Afro-Brazilian dances and traditions, she converted to Umbanda in her later life. On 1983, she died at age 39 after suffering from anaphylaxis during a surgery to treat varicose veins. Until today, she remains one of the most popular singers in Brazil.
Sites:
MySpace
In Groups:
G.R.E.S. Portela
Variations:
Viewing All | Clara Nunes
Clara