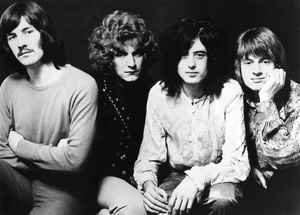 Profile:
Led Zeppelin formed out of the ashes of The Yardbirds. Jimmy Page had joined the band in its final days, playing a pivotal role on the group's final album, 1967's Little Games, which also featured string arrangements from John Paul Jones. During 1967, the Yardbirds were fairly inactive.  Whilst the band members decided the group's future, Page returned to session work in 1967. In the spring of 1968, he played on Jones' arrangement of Donovan's "Hurdy Gurdy Man." During the sessions, Jones requested to be part of any future project Page would develop. Page would have to assemble a band sooner than he had planned. In the summer of 1968, the Yardbirds' Keith Relf and Jim McCarty left, leaving Page and bassist Chris Dreja with the rights to the name, as well as the obligation of fulfilling an upcoming fall tour. Page set out to find a replacement vocalist and drummer. Initially, he wanted to enlist singer Terry Reid and Procol Harum's drummer B.J. Wilson, but neither musician was able to join the group. Reid suggested that Page contact Robert Plant, who was singing with a band called Hobbstweedle.

Unpopular opinion but mine: The most overrated Band in Rock History!

September 3, 2021
Discogs please listen to the people who make discogs possible and take it back to the old style format, this is shit, too much of everything else. We just want the studio stuff and official live in chronological order and thats it. Chuck the rest in miscellaneous, simple.
See 2 replies

November 12, 2020
Good artists borrow, great artists Steal, or something like that. How many of the great blues men just regurgitated what came just before but when Led Zeppelin or the Stones did it its a big deal.
See 1 reply

March 23, 2020
There is an absolutely stunning amount of Unofficial releases in every category here. It would be a full time job to just go through them all and remove them.

November 20, 2019
THEE greatest band in rock history, there are no greater
See 3 replies

November 3, 2019
One of the most famous cover bands in music history.
See 2 replies

February 15, 2018
Hearing this on a lovely near mint 1971 pressing for the very first time (and now on my third listen), and this is such a phenomenal timeless album. It doesn't matter what genre of music you favour and even (like me) you think that heavy metal is rather embarrassing, this album is a work of art. I can't quite put my finger on it or explain why it works so well (guitar solos tend to bore me), but on this album, it all works so beautifully. Whatever you pay for this on vinyl, it is money well spent.
See 2 replies

November 20, 2016
What a classic band. Sure they stole A LOT of old blues stuff, but i still LOVE them!
See 1 reply