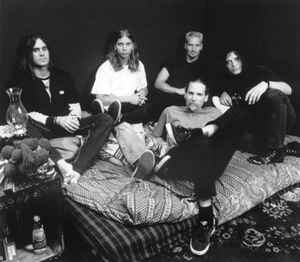 By 1992, original guitar-player Jason Coppola and drummer Reed St. Mark had been replaced by Jason Everman and Shawn Johnson respectively. It was also during this period that the band changed their name from Mind Funk to Mindfunk, from two words to one.

By the end of 1994, after the leaving of John Monte and Jason Everman, the band continued as a four-piece, with temporary bassists Frank Ciampi and Spike Xavier.
They split up in 1995, after the recording of their third album, "People Who Fell From The Sky".
Sites:
Wikipedia
Members:
Frank Ciampi, Jason Coppola, Jason Everman, John Monte, Louis Svitek, Patrick Dubar, Reed St. Mark, Shawn Johnson (4), Spike Xavier
Variations:
Viewing All | Mindfunk (2)
Mind Funk