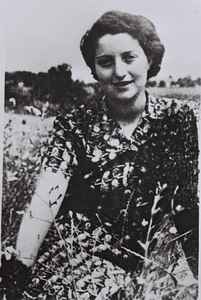 Real Name:
Hannah (or Chanah) Senesh (Hebrew: חנה סנש‬; Hungarian: Szenes Anikó)
Profile:
Chanah Senesh (born July 17, 1921 in Hungary; died November 7, 1944, Budapest, Hungary) was a Jewish poet and playwright. She wrote both in Hungarian and Hebrew. Several of her Hebrew poems have been set to music and recorded by artists including Ofra Haza, Regina Spektor, and Sophie Milman.

Senesh emigrated to the British Mandate of Palestine (now Israel) in 1939. In 1941 she joined Kibbutz Sdot Yam and then joined the Haganah, the paramilitary group that laid the foundation of the Israel Defense Forces. She enlisted in the British Army in the Women's Auxiliary Air Force in 1943. She was one of 37 Jewish parachutists from mandatory Palestine parachuted by the British Army into Yugoslavia to assist in the rescue of Hungarian Jews about to be deported to the German death camp at Auschwitz. Senesh was arrested at the border, tried, and executed. She is considered a hero in Israel and her life story has been made into films twice.
Sites:
hannahsenesh.org.il, Wikipedia, Wikipedia
Variations:
Viewing All | Chanah Senesh
Chana Senesh, H. Senesh, H. Szenes, Hannah Senesch, Hannah Senesh, Hannah Senesz, Hannah Szenes, ח. סנש, חנה סנש