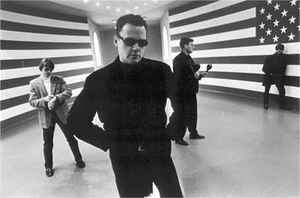 Profile:
Garage rock'n'roll band from Groningen, Holland formed in 1993 by three friends and a dog, according to Waistcoats drummer Jack "Genius" Outhuis. Their sound is heavily infuenced by mid sixties garage and punkrock.
Inspired buy the seminal mod presence of the Who, the Jam, and the Creation, Stringwrecker (guitar/vocals), Jack the Mad Genius (drums), and Blind Johnny Welder (bass/harmonica) formed under the moniker of the Waistcoats in 1993. Providing England with their revival of the 1960s, the trio released a number of EPs on various labels before Alopecia Records funded their 1997 debut album, The Surfisticated Sounds of the Waistcoats. Following the 10" EP Beat Party With the Waistcoats two years later, Larsen Records released the Waistcoats' second full-length, EXPLOSION, in early 2000. They also managed to release a number of CD's, Stark Raving Mod! and All The Rage. Through the years the sound has become a bit more (not much however) polished. Their last (vinyl) album was a conceptual work called We Are The Doctors, in Jack Outhuis' words: "It was our Village Green Preservation Society/Ogden's Nu Gone Flake album". In 2014 the group threw a 20th anniversay party in EMG Faktors in Groningen.
Through the years the group has been touring extensively through Europe, The U.S.A. and Great Britain. Highlights were Liverpool's Cavern, but also a gig in Austin, Texas.
At this moment (2017) the future of the group is uncertain.
People interested in buying Waistcoats records and CD's can try contacting Jack Outhuis at: [email protected] .
Members:
Evert-Jan Kloosterboer, Gerard Burger, Harry Kingma, Jack Outhuis, Jan Herman Veldkamp
Variations:
Viewing All | The Waistcoats
Die Waistcoats, Waistcoats