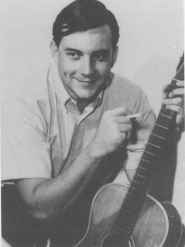 Roberts learned to play the 12-string guitar and blues harmonica, on which he claimed to have been tutored by Sonny Terry. In the early 1960s he went to Greenwich Village where he played on the street and in coffeehouses. It was during this time that he composed the song "Hey, Joe," which he copyrighted in 1962. He soon moved to San Francisco, which would become his base of operations for the rest of his career. In 1964-1965, Roberts was part of a San Francisco-based folk trio called The Driftwood Singers, who performed at the hungry i, opening for acts like Bill Cosby, Carmen McRae, Godfrey Cambridge, and Joan Rivers. The group participated in an entertainment event at San Quentin Penitentiary on New Years Day 1965, which also included Louis Armstrong, Sarah Vaughan, and Johnny Cash.

In 1965, Roberts was alerted by a friend to a recording of "Hey Joe" done by the Southern California rock band, The Leaves. Roberts had not heard of the recording and his friend (Hillel Resner, later his producer) offered to ask his father, an attorney, to look into the matter. The attorney discovered that folk singer Dino Valenti had claimed authorship of the song and signed a publishing contract with Third Story Music of Los Angeles. This led to negotiations that resulted in Roberts retrieving his author's rights, but it did not prevent numerous recordings being released that named several other songwriters, in addition to Valenti, as the author. While residing in the Bay Area, Roberts performed in many of the local clubs. He was the opening act for the Steve Miller Band at the Straight Theater in Haight-Ashbury in September, 1967. He also opened for the Santana at a Bill Graham (2) Winterland concert in 1970. In 1975, Roberts recorded the country rock album Thoughts of California with the band Grits (2) (which he produced with Hillel Resner).

March 13, 2021
Niela Halleck should at least have a co-credit for writing "Hey Joe."