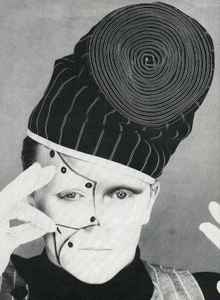 Profile:
Pioneers of the New Romantic movement, the synth-pop group Visage emerged in 1978 from the London club Blitz, a neo-glam nightspot which stood in stark contrast to the prevailing punk mentality of the moment. Spearheading Blitz's ultra-chic clientele were Steve Strange and DJ Rusty Egan, one time drummer with the Rich Kids. Seeking to record music of their own to fit in with the club's regular playlist (a steady diet of David Bowie, Kraftwerk, and Roxy Music), Strange and Egan were offered studio time by another Rich Kids alum, guitarist Midge Ure. In late 1978, this trio recorded a demo which yielded the first Visage single, an aptly futuristic cover of Zager & Evans' "In the Year 2525."

Visage were an early '80's electronic supergroup. Fronted by club kid Steve Strange, the band was made up of various members of Ultravox, and also featured guitarist John McGeoch and bassist Barry Adamson. They broke onto the scene with the "Fade To Grey" 45, and continued to have a few more hits over the next few years. They were a big part of the Futurist/New Romantic scene that included Spandau Ballet,Duran Duran,Talk Talk etc...