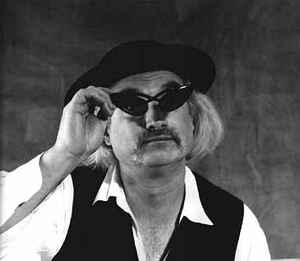 Real Name:
Holger Schüring
Profile:
German musician, who studied under Karlheinz Stockhausen from 1963–1966, and in 1968 co-founded the German rock group Can, for whom he played bass guitar, as well as undertaking most of their recording and engineering. Czukay also recorded some early ambient albums, and was influential for his utilization of radio sounds and sampling.

September 28, 2018
In the 1990s some friends and I ran a tiny esoteric/ ambient Sunday club in Glasgow. We were booking as many of our inspirations to play live as we could. We couldn’t believe our luck when Holger agreed to perform for what seemed like a small fee. Then his rider came through: literally HUNDREDS of stipulations. A weather forecaster on hand to deliver up-to-date meteorological predictions. Politicians of left and right wing on hand to argue throughout any performance. Toast to be served on demand. The most wonderfully beautiful and yet impossible to achieve list imaginable. Still wish we’d found that weather forecaster...

September 6, 2017
Holger Czukay was a very prolific musician. His curiosity goes far beyond any standard. I think that we always look for some inspiration based on our own rules, but Czukay use to break those patterns, the result is easy to be perceived on his recordings.
†

September 6, 2017
RIP Holger, your music was indescribable. It sounded like it was from another planet or something, even in the sixties his records (Can and Canaxis) sounded like he was already way ahead of time.

You will be truly missed...

Holger came right out of the European avant garde classical zone in the mid-late 1960s with absolutely no rock or pop background to speak of. It was only when a younger friend, Michael Karoli, played him The Beatles' I Am the Walrus that he grasped rock's potential. Abandoning his classical pretensions (although always with great debt to his teacher and mentor Karlheinz Stockhausen) Holger, along with Irmin Schmidt, Jaki Liebezeit and Michael Karoli created The Can, making a string of never-to-be-surpassed albums '69 - '74.

Holger was the main architect of the classic Can tracks, editing down lengthy jam sessions into manageable album-friendly sides. Pre-digital editing and sampling the only way to do this was with reel-to-reel tape and a razor blade. This involved countless hours at the splicing block - hours which, after about 1974, became either difficult to find.... or maybe the initial inspiration behind Can was spent.

Many good and occasionally great albums followed (for instance the epic 'world music' sampling, highly influential 'Movies' from 1979; David Byrne and Eno definitely copped an earful of this one) and it's worth checking both his and Can's discography (and other solo releases from Jaki & Irmin) with care as gems can be found right up until almost the present day..... but it is with the classic Can albums from 1969 - 1974 that Can and Holger will be remembered.
Now three of the band are no longer with us. Only Irmin remains.
RIP Holger, Jaki and `Michael - three of the all time great musical visionaries, prophets and seers.